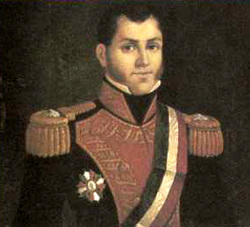 Agustín de Iturbide was born on September 27, 1783 in Valladolid, Mexico. When the Revolution first began, he started as an officer and then became the commander of the Northern Mexican army.
Wanting to find a way to peacefully gain independence from Spain, Iturbide helped create the Plan of Iguala, issued in 1821. Known as the triguarantine plan, Mexico would be a monarchy independent from Spain ruled by a Spanish prince from the French Bourbon family under it. The only change to the government itself was that Creoles (Mexicans with direct European ancestry) were given more power. The Plan of Iguala convinced Mexican conservatives to support independence.
On July 21, 1822, Iturbide was crowned emperor after no European monarch wanted to be Mexican emperor. His admiration for European government was shown in the elaborate imperial court he created. As an emperor, though, he had no tact. Wanting absolute power for himself, he dissolved the Mexican congress. After that, people started to hate and rebel against him. Noticing he was not well-liked, Iturbide gave up the throne on March 19, 1823 and left Mexico for Europe. While he was residing in Spain, he heard Mexico was in danger. He wrote to the Mexican government offering his help, but his offer was misinterpreted as an attempt to seize power again. Angry at him, the Mexican congress sentenced him to death. He was executed on July 19, 1824.