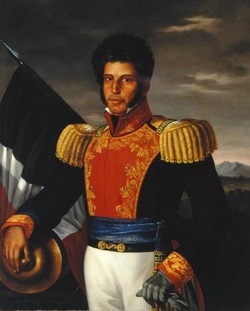 Vicente Guerrero was born a mixed-race (mestizo) child in Tixtla, Mexico on August 10, 1783. Although he received no formal education,  he was a brave man who fought bravely in Mexican Revolution under Fathers Hidalgo and Morelos.

In 1828, Guerrero ran for President against Pedraza, the conservative candidate. After winning the election, he exiled Pedraza with the help of Antonio de Santa Anna. In sharp contrast to his time as a general, during his time as president beginning in 1829 he was a timid, indecisive leader who pardoned his former opponents.

Unsatisfied with Guerrero's presidential actions, conservative vice president Anastasio Bustamante led the Mexican army in a revolt in early 1830. Guerrero fled to the mountains and later tried to board a ship bound for Italy. The captain, however, recognized him and turned him over to the conservative authorities for 50,000 pesos. Guerrero was tried and found guilty of treason and sentenced to death. He was executed in Cuilapan on February 14, 1831.