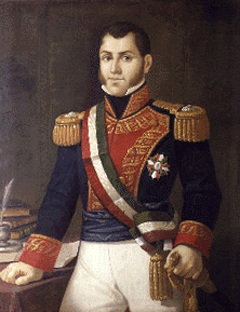 Guadalupe Victoria was born Jose Fernandez. He fought under Father Morelos in the Mexican Revolution. During that time, Victoria changed his name to show devotion to his country (the Virgin of Guadalupe was a symbol of the Revolution) He was a courageous general.
He started out as a supporter of Agustin de Iturbide, but was angered when he started abusing his power. He helped Santa Anna in his rebellion that took Iturbide out of power. After, he became Mexico's first president. While he was not good with domestic policy and did nothing to improve Mexico's failing economy, he formed good international relationships with his strong foreign policy skills. Like with Vicente Guerrero, Victoria's vice president Nicolás Bravo tried to rebel against him, but that rebellion was defeated by Vicente Guerrero and Antonio de Santa Anna.